Fordham Prep graduate Cameron Young will be one of the golfers teeing off Thursday in the PGA Tour’s BMW Championship in Wilmington, Del.

Tee times will be released Wednesday for the four-day tournament.

Last weekend, Young finished tied for 31st at six under over four days at the FedEx St. Jude Championship in Memphis. He shot four under on the tournament’s final day.

Yost pitched in game one of the best-of-three East Division Final, allowing five earned runs on seven hits and striking out four over six innings during a 6-3 loss to the Brewster Whitecaps. The Red Sox were eliminated in two games by the Whitecaps, and Brewster, the defending league champ, will play Bourne at 3:30 this afternoon in game two of the championship series with Bourne leading the best-of-three series, 1-0.

Yost finished his summer with a 2-6 record and a 4.19 earned run average. The pitcher for Northeastern University gave up 37 hits and 10 walks in 38 ⅔ innings. He struck out 28.

The Red Sox, the second seed, will host the third-seeded Firebirds in game 1 tonight and game 3, if necessary, on Saturday. Game 2 is in Orleans on Friday.

Yost, 19, is pitching for a second summer on Cape Cod and finished the regular season at 2-5 with a 3.58 earned run average. In 32 ⅔ innings over seven games, six being starts, he allowed 13 earned runs on 30 hits and 10 walks. Yost, who plays at Northeastern University, struck out 24.

In his last outing on July 31 against Orleans, Yost allowed an earned run on three hits and struck out six over 5 ⅓ innings.

Vin Scully was featured in a Catholic New York story after announcing he would retire from broadcasting following the 2016 baseball season.

Scully, who died Tuesday at the age of 94, talked with Catholic New York talked about his life in New York and his broadcasting career.

Young, 25, shot 4-under par over the final six holes to finish at 21 under for the tournament and in a three-way tie with Patrick Cantlay and Taylor Pendrith. Tony Finau won the tournament at 26 under.

It was the second consecutive second-place finish for Young, who was second two weeks earlier at the British Open.

Young, a graduate of Wake Forest University, has five second-place finishes and seven top-10 finishes. He is the leading candidate for the PGA’s Rookie of the Year and ranks ninth in the FedEx Cup standings.

PGA golfers will be competing Aug. 4-7 in the Wyndham Championship at Sedgefield Country Club in Greensboro, N.C.

The Fordham Prep graduate shot a 7-under 65 in the final round of the British Open on Sunday to finish at 19 under for the four-day tournament at St. Andrews in Scotland.

Cameron Smith finished at 8 under Sunday and 20 under over four days to win the tournament.

The British Open is one of the four major championship tournaments on the PGA Tour.

“I think I gave myself a really nice chance, frustrating to come up short, but overall I think I had a really good week, and I think I hung in there really well today,” said Young, a Scarborough resident in Westchester County in the press conference following the tournament.

“I played really well today and I would have signed up for 65 this morning and to watch Cameron shoot what he did was pretty amazing.”

Young and Smith were tied entering Sunday’s final round, and trailed leaders Rory McIlroy and Viktor Hovland by four strokes. Young and Smith took over the tournament spotlight on the back nine where Young shot 5 under and Smith finished 6 under.

“I had a front row seat to I’m sure one of the better rounds that’s been played this year,” said Young.

Young, 25, shot under par in all four rounds of the open, including a 64 to lead the tournament after the first day.

Young, who placed second for the fourth time in his young PGA career, earned $1.455 million for placing second at the British Open. 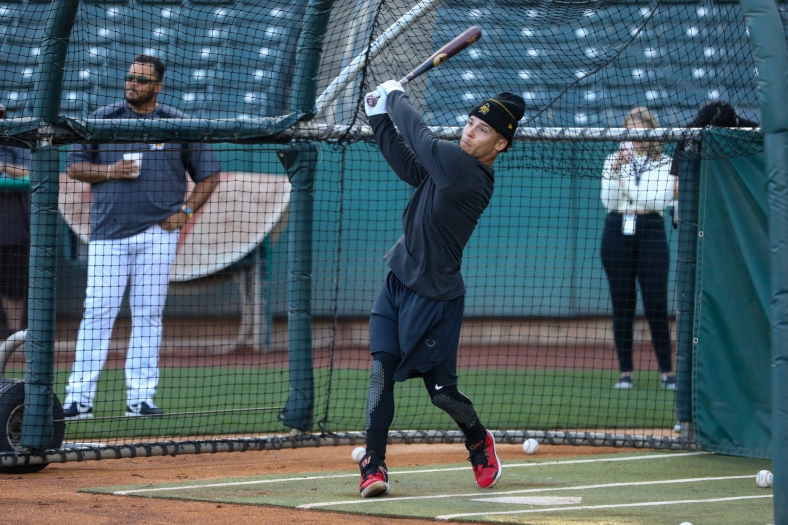 Fordham Prep graduate Andrew Velazquez belted his fifth home run of the season for the Los Angeles Angels during an 11-4 loss to the Chicago White Sox on Tuesday night.

Velaquez has five home runs in 200 at bats this year after having one home in his 197 career at bats prior to this season.

Velaquez and the Angels finish their series tonight with the White Sox before traveling to Houston for a series with the Astros that begins on Friday night.

Yost, a pitcher for Northeastern University in Boston, allowed one earned run on four hits and one walk in 5 ⅓ innings for the Red Sox. He struck out three.

In two starts this summer, Yost is 0-2 with a 3.85 earned run average. In 9 ⅓ innings, he’s allowed one walk and struck out eight.

In the Division II boys long jump, Deion Joseph of Albertus Magnus was third with a leap of 22 feet, 5.5 inches.