Iona Prep graduate Matt Ryan was called up to the Boston Celtics and will be making his NBA debut this evening when the Celtics play in Toronto.

The 6-foot-7 forward was playing with the Maine Celtics of the NBA G League where he was averaging 19.1 points, 3.4 rebounds and 1.9 assists per game in 27 games this season.

Archbishop Stepinac High School graduates RJ Davis and AJ Griffin will be a part of a historic meeting when North Carolina (28-9) and Duke (32-6) meet in the NCAA Division I men’s basketball Final Four in New Orleans on Saturday.

The two rival programs from the Atlantic Coast Conference, located less than 10 miles from each other, will be meeting for the first time in the NCAA tournament. Duke and North Carolina are scheduled for an 8:49 p.m. start.

Griffin finished with a team-high 18 points, three rebounds, one steal and one block for Duke in its 78-69 victory over Arkansas in the West Region final in San Francisco on Saturday. The freshman was 7 for 9 from the floor and 2 for 3 from beyond the three-point arc.

“You know, we never doubted as a team, a young team too,” said Griffin, who had 11 points, seven rebounds, one assist and one block in a 78-73 Sweet 16 win two days earlier over Texas Tech.

Davis contributed nine points, four rebounds, four steals and three assists as  North Carolina ended the Cinderella run of St. Peter’s with a 69-49 victory in the East Region final in Philadelphia on Sunday. The Tar Heels scored the game’s first nine points and led, 38-19, at halftime.

Davis and Griffin led Stepinac to the New York State High School Federation AA championship in 2018. Both earned spots on the all-tournament team.

Archbishop Stepinac High School graduate Fred Quartlebaum is heading to the NCAA Division I men’s basketball Final Four with Kansas after the Jayhawks defeated Miami, 76-50, in the Midwest Region final in Chicago on Sunday.

Quartlebaum is the director of basketball operations for the Kansas men’s basketball team, one of the top seeds in this year’s NCAA Division I tournament. The Jayhawks (32-6) will play Villanova in the Final Four at 6 p.m. Saturday.

Quartlebaum played four years at Fordham and holds a degree in communications from the university in the Bronx. A co-captain in his senior season, he led the Rams into the 1988 NIT tournament.

Prior to his arrival at Kansas, he served as an assistant coach at Navy, Towson, Holy Cross, Fairfield, Iowa State, North Carolina, St. John’s and Notre Dame.

Quartlebaum and his wife Christy have two sons, Trey, who plays for St. Francis in Brooklyn, and Mayson, who is a forward at Kennesaw State.

The Archbishop Stepinac High School boys basketball coach lived through it as a student at Marist College in Poughkeepsie 15 years ago when the Marist women’s basketball team became the first Metro Atlantic Athletic Conference men’s or women’s basketball program to reach the Sweet 16.

“It was awesome–they made it to the Sweet 16 and faced Tennessee and Pat Summit,” Massaroni told Catholic Sports Scene. “I actually went to the game. What it did for the school and the surrounding area is similar to St. Peter’s. Everyone knew who Marist was after that. This is why sports matter.”

Just like 15 years ago when college basketball fans were learning where Poughkeepsie is, fans are now learning of the Catholic university in Jersey City–the home of the MAAC champion and 15th seed St. Peter’s University men’s basketball team that will play third seed Purdue in tonight’s Sweet 16 East Regional game in Philadelphia.

“They have played as a team, really run their offense efficiently and have been able to defend at a high level,” Massaroni said of St. Peter’s success.

What follows for the Peacocks and head coach Shaheen Holloway may result in great future storylines. Marist appeared in nine consecutive NCAA tournaments (2006-2014) and won five NCAA games under head coach Brian Giorgis, who coached Our Lady of Lourdes High School in Poughkeepsie to nine state championships and is the only New York State public high school coach to lead teams in four different sports to the state final four. He is believed to be the only NCAA Division I basketball coach to win over 400 games at both the high school and collegiate levels, and now has 451 wins at both levels.

You also wonder what the players will be doing years from now. What will be in the future of Jaylen Murray, who attended and played basketball at Cardinal Hayes High School in the Bronx? Will Doug Edert follow in his uncle’s footsteps and be working for CBS at NCAA tournaments?

Julianne Viani, a member of the 2007 Marist team who played basketball for Giorgis at both Lourdes and Marist, is now a basketball analyst on television, serving in the role this week for CBS Sports at the NCAA Division II women’s basketball championships.

Massaroni will be watching tonight as will millions more cheering for St. Peter’s to continue its Cinderella run. Many of the viewers will be learning more about Jersey City, Holloway, Murray and Edert.

“They are the 15 seed and fans love upsets. Not only will they be watching but rooting for them,” said Massaroni.

Massaroni also will be viewing with some extra interest as the winner of tonight’s game will play either North Carolina–led by Stepinac graduate RJ Davis–or UCLA in the Elite Eight.

Two former CHSAA guards–Davis and Murray–going up against one another with a trip to the Final Four on the line would make for another great March Madness story.

“Do they have a 7-foot-3 starting center and a Big Ten, All-League sixth man–no, but what they have is confidence, a team that believes they can win and it should be a great game Friday night,” said Massaroni of St. Peter’s.

Griffin injured his left ankle in his team’s second-round win over Michigan State on Sunday. He left the game in the second half, but never returned to the locker room for treatment. He played 37 minutes against Texas Tech.

RJ Davis is having quite a sophomore season and NCAA tournament for North Carolina which plays UCLA in Philadelphia in the Sweet 16 of the NCAA Division I men’s basketball tournament at 9:30 p.m. Friday on CBS.

The Archbishop Stepinac High School graduate is coming off his best collegiate game when he scored a career-high 30 points in a 93-86 overtime win over top seed and defending national champion Baylor. He finished with five rebounds and six assists, and was 8 for-17 from the field, 5 for 10 from three-point range and 9 for 10 from the free-throw line. The made free throws, free throws attempted and field goals attempted a all career highs.

The sophomore guard contributed 12 assists in his team’s 95-63 first-round victory over Marquette.

Davis is averaging 13.5 points and 3.9 rebounds per game for North Carolina (26-9 overall). His 74 assists are second on the team, and he’s fourth on the Tar Heels in scoring.

There is a third Archbishop Stepinac High School graduate still going strong in the NCAA Division I men’s basketball tournament.

Fred Quartlebaum is the director of basketball operations for the Kansas men’s basketball team, one of the top seeds in this year’s NCAA Division I tournament. The Jayhawks (30-6) will play Providence in the Sweet 16 in Chicago at 7:30 p.m. Friday on TBS.

Quartlebaum joins Stepinac graduates RJ Davis and AJ Griffin, who are playing for North Carolina and Duke, respectively, in the Sweet 16.

Quartlebaum played four years at Fordham and holds a degree in communications from the university in the Bronx. A co-captain in his senior season, he led the Rams into the 1988 NIT tournament.

Prior to his arrival at Kansas, he served as an assistant coach at Navy, Towson, Holy Cross, Fairfield, Iowa State, North Carolina, St. John’s and Notre Dame.

Quartlebaum and his wife Christy have two sons, Trey, who plays for St. Francis in Brooklyn, and Mayson, who is a forward at Kennesaw State.

AJ Griffin will be in the lineup tonight for Duke when it meets Texas Tech in the Sweet 16 of the NCAA Division I men’s basketball tournament in San Francisco.

The Archbishop Stepinac High School graduate injured his left ankle in the second half of his team’s second-round win over Michigan State. The freshman forward was seen walking near the bench area, but never left the court to receive treatment.

Griffin is averaging 10.3 points and 3.9 rebounds per game, and is shooting 50 percent from the floor and 46 percent from three-point range. He earned a spot on All-Atlantic Coast Conference Freshman Team and was honorable mention All-ACC.

Duke (30-6) won the Atlantic Coast Conference regular-season championship and is the second seed in the West Regional. Duke coach Mike Krzyzewski is coaching in his final season and will retire at the end of the season. 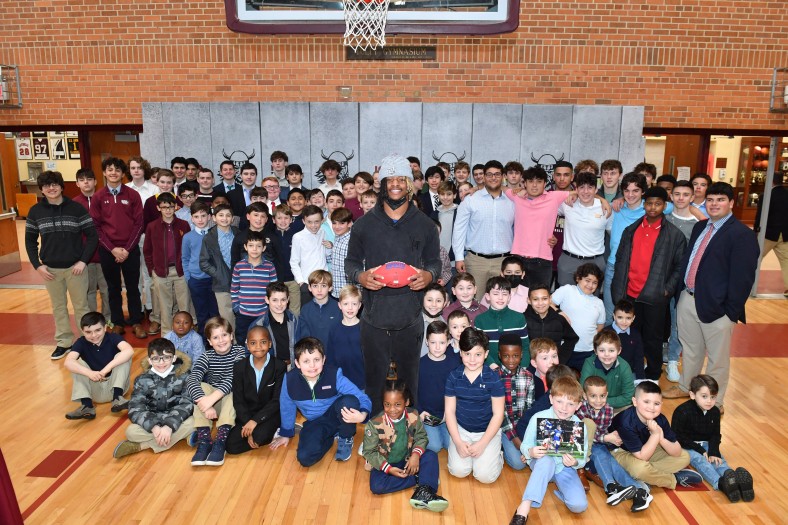 New York Giants safety Xavier McKinney was the guest speaker at the Iona Preparatory School’s annual Father-Son Breakfast attended by more than 230 people at the school on Sunday.

McKinney answered questions and signed autographs for those in attendance.

A 2020 second-round pick of the Giants, McKinney had 93 tackles and five interceptions in 2020 for the Giants. In two NFL seasons, he has 118 tackles and six interceptions. McKinney attended the University of Alabama and played football for coach Nick Saban.

The annual event began over 60 years ago. Former Giants owner and Iona Prep parent, the late Wellington T. Mara, had Giants attending the breakfast when his sons attended the event in the 1970s. His sons–John Mara, CEO and president of the Giants; Chris Mara, senior vice president of player personnel; and Frank Mara, vice president of community relations, all graduated from Inoa Prep in the 1970s. 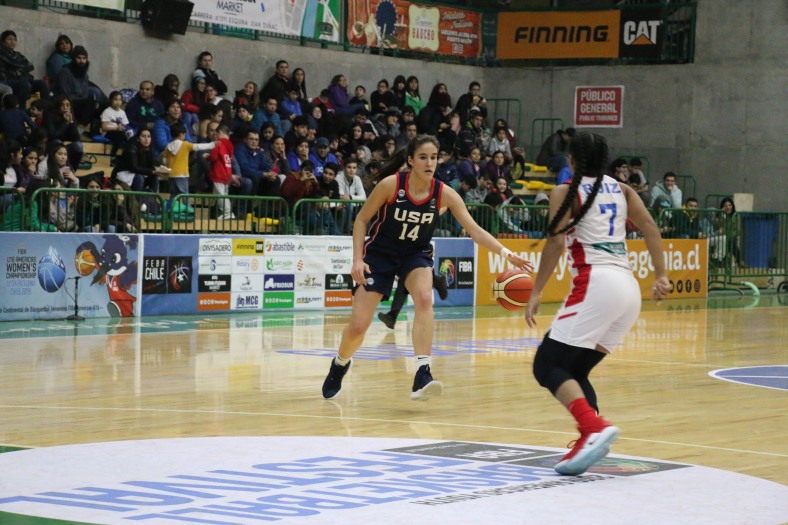 Sonia Citron, a graduate of The Ursuline School, scored 25 points in leading the University of Notre to a 108-64 victory over fourth seed and host Oklahoma University in the second round of the NCAA Division I women’s basketball tournament on Monday.

The Atlantic Coast Conference Rookie of the Year was 11 for 11 from the free-throw line and finished with 20 or more points in a game for the third time this season. The 6 foot 1 guard, who was 7 for 13 from the field, also had six rebounds, four steals and three assists.